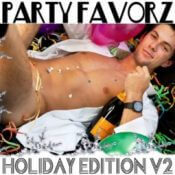 SURPRISE! I had not previously announced the second part of the 2014 Holiday Edition because I wasn’t sure if there would be one.  But, as songs continued to pour in, it became abundantly clear I was gonna have to do something with them since the Winter Edition doesn’t usually come out until late January to early February.

I opened things up with Division 4’s update of the Martha Wash classic Catch the Light and what a winner this is.  He makes use of the familiar Infinity sax during the drop before pumping it back up to a circuit-laced deep house infused floor-filler, perfect for warming your sets up before all hell breaks loose.

I went ahead and added Barry Harris’ Divalicious remix of Bonnie Tyler’s Total Eclipse of the Heart which added a lot more dramatic flair to his original remix featured in the last set.  I also dropped in his full-on remix of Love Come Home by Kristine W, which adds about another 2 minutes of drop 2/3 of the way in compared to his mixshow I previously posted.  I also dropped Ranny’s remix of Astrofreeks Keep It Moving featuring Kathy Sledge of We Are Family fame, a tune that’s been powering up the club charts with a bevy of stellar remixes.  Other than that, everything else is brand-spanking new kick-ass tribal beats.

While the entire set is a masterful collection of the latest in circuit-house, there are some standouts worth focusing on.  The Barry Harris remix Sugar by Five Knives (look for other equally great remixes across genres that come with the package as well), Speak No Evil with its heart-pounding big beats and power-house vocals by Kimberly Davis; Guy Scheiman’s Brazilian party anthem Brazil You’re Ready and Robbie Rivera’s return to form with his big room progressive track Sexy Anytime.

I also want to take an opportunity to give big cred to Tracy Young, who I previously have been hard on for turning out Bey’s 711 to the MAX.  She keeps it dark and tribal while focusing on the key party phrases of the song making it more on an anthemic dub that’s bound to pack the floors well into next year.  Well done, my lady!

I hope everyone’s finished up all your shopping and are ready for the holidays.  In fact, get off the roads forget that shit and get ready for an extended party, because Party Favorz is the gift that keeps on giving.  I WILL be back on Tuesday with a very special Diva Series for everyone’s pleasure.  I just put the final mixdown on that set last night and am so excited to be releasing this.  I had a ton of fun putting it together.  Make sure to add that to your holiday calendar.

8. Eartha Kitt – Where Is My Man (Offer Nissim Remix)

Typical Circuit style mix on disc one. The other side is Tech heavy. Overall, this is where I began to realize that …Read More, Stream and Download

It’s that time of year again; and what a rollercoaster year this has been; not just for me in my professional life …Read More, Stream and Download

Circuit music was at its peak in the late 90’s through 2005 before cooling down and becoming a niche genre. It remained …Read More, Stream and Download

SURPRISE! Party Favorz was commissioned by one of our loyalist to create a Pride mix specifically for them. Over the years, I’ve …Read More, Stream and Download