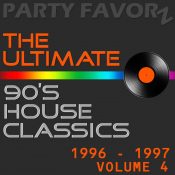 It’s always a sigh of relief when I finish one of these epic anthologies and I’m happy with the final product. Volume four of the Ultimate 90’s House Classics showcases the splintering of the genre and how more progressive versions of House Music were suddenly taking over dance floors.

Club 69 (a.k.a. Peter Rauhofer) who was generally a sexy house music production geared toward gay audiences, changed musical directions quite rapidly. Eventually, the productions became more progressive and frenetic, which would drive peak hour crowds into a tizzy. Club 69 hit it big with remixes for Funky Green Dogs “Fired Up” and Kevin Aviance “Din Da Da” amongst many others during this period.

At the same time, Tony Moran, Junior Vasquez, Victor Calderone, Ralphi Rosario and Hex Hector were beefing up their sound while making it more palatable to a mainstream audience giving the genre and even further reach.  This is not to say the House Music in its purest form wasn’t still king as evidenced by the multitude of #1 club songs included in this final set. But, this new sound was embarking on something much bigger that would eventually takeover not only the charts but dance floors in the coming years.

Everyone found their place or shall I say true calling as a DJ and no longer were these guys just a DJ, two turntables and a microphone (thank you Beck). They were stars in their own right that could pack a venue. Perhaps the biggest contributor to their stardom was none other than Clive Davis of Arista records. He saw not just in terms of financial but the need to expand his diva roster’s reach into the world of dance and by extension their popularity. After all, where would Deborah Cox be today if it weren’t for him pushing her in both angles of R&B and Dance extending her visibility across boundaries.

While Party Favorz enjoys all the various genres and tribute sets I put out from Trash Disco, 80’s Dance, Eurodance and Trance — I have the most affinity with House Music and its various iterations. The Ultimate 90’s House Classics series is dear to my heart. While this series is far from the last word on House Music (as there’s just way too much to be included even if the artists and songs deserve it) — it’s likely the closest you’ll ever find in a comprehensive history of the genre.

We still have two more years to go with 1998 – 1999, which are bound to bring back some fond memories for many of you. I’m not certain as to when I’ll be dropping those but likely sometime in the summer or no later than early fall. I still have the Ultimate Trance series I’ve been teasing that I want to get out by the end of the year as well. Until then…ENJOY!

Party Favorz is back with the Essential 80’s Dance Mix Volume 3, which focuses on Funk, R&B Dance and the earliest days …Read More, Stream and Download

Batten down the hatches because Party Favorz is back in business and about to release a tsunami of 90’s House Classics that …Read More, Stream and Download

I realize this feels like a Netflix series that seems to drag on and on but I promise to take a break …Read More, Stream and Download

After sorting through all the recent promos and moving them to their respective folder based on genre (most to the recycle bin) …Read More, Stream and Download