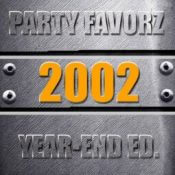 For those of you that remember 2002 fondly, I think you’ll find it was worth the wait.  It’s often difficult for me to remember everything that was hot in any given year.  After I had already finished three of the mixes, I started going through my old sets from that year and came across several other songs that were imperative for inclusion.  Many of them, I no longer had access to.  So, I had to send out feelers to see if any of you could help out and sure enough, you did.  Thanks to several of our contributors, about a 1/4 of this mix was completed due to their generosity.

As mentioned in previous editions, the millennium saw the rise of the DJ to prominence.  In fact, they often were the superstars behind much of the club music and still are to this day.  I could remember hitting pay dirt when I bought a CD maxi that had mixes by say Hex Hector, Thunderpuss and several up and comers all on one disk.  With so many mixes of a song to choose from, it wasn’t uncommon to hear more than one version being spun in your local club on any given night.  However, as the names became synonymous with the songs, so did the asking price to complete a mix of the branded pop stars.  Obviously, the music industry has taken a turn for the worse (much of it due to their own arrogance and neglect), it’s rare to find these kind of options unless it’s a really big star like Madonna or Beyoncé.  Sometimes, they are kind enough to do it for free or at a reduced rate when it’s someone new or someone they’re willing to throw their support behind.  For the most part, the major labels now just throw out an acappella and hope every Tom, Dick and Harry will remix their song without it actually making the final release, knowing full-well that it would find it’s way on to the Internet.  You can’t buy that kind of promotion.

As each DJ name became bigger and bigger, the songs became longer and longer, with each trying to outdo the next.  For all purposes of these mixes, I’ve edited much of the songs down so as to keep these mixes under the 80-minute mark.  In most cases, you’ll never know where the cuts are made as long as you get the meat of the original.  Frankly, I used to make my own mixshow edits anyway.  I found that you could squeeze more into one set by doing that.  Especially when you live in a state where the last call comes at 1:00 and closing time was mandatory at 2:00.  Couple that with a drag show and male strippers, there’s not much time left in the evening for sweating up the floor.

This set will be the first of many from 2002.  Meticulously put together for your listening pleasure and a trip down memory lane.  I highly recommend that everyone who has a specific year they want to remember, download and save these mixes.  They are definitely one of a kind and it’s not likely you will ever find anything as complete as these.  Keep in mind, there are also 1999 – 2001 editions readily available on this site.  I’ve also mixed up several 90’s comps which is where I’ll be heading the next go around sometime in the summer.  As I role these out throughout the week, I’ll start looking at the next BPM edition.  I’m sure many of you are aching for some new electro-funk and it finally looks like it’s getting good.  In fact, I’d say summer madness is almost here.  I’ll be back tomorrow with the next installment of this series.  Until then…enjoy!

9. I Got The Music In Me (Solar City Club Mix) – Erin Hamilton

Happy Friday everybody! Party Favorz is back with the annual Catch-Up series where we compile the biggest dance club hits of the …Read More, Stream and Download

After finally having some beautiful weather for the past several days, the ATL is back to cold, wet and dreary.  I guess …Read More, Stream and Download

I apologize for the delay, but I’ve been really busy working on the site and trying to get all the back-end stuff …Read More, Stream and Download