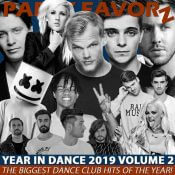 Party Favorz is back with Volume 2 of our annual non-stop mix  Year In Dance featuring the top Dance Club hits of 2019!

Even with the shifting genre tides in dance music, there’s always room for some darker songs that breakthrough and become monster hits in their own right. FISHER’s surprise hit “Losing It” was released in July 2018 and then had a steady rise to the top of Beatport’s dance charts where it ruled for over a month. Shortly after — it made a steady climb up Billboard’s Dance Club charts finally nesting the number one spot last year. Spurring a mass amount of mashups and bootlegs, the song was so popular — it ranked again as one of the top tracks for 2019.  It was an unlikely candidate for such a monster hit but the infectious deep beats and repetitive refrain just stuck to our brain like superglue.

FISHER followed that up with the equally dark “You Little Beauty” which samples (once again) the fabulous Loleatta Holloway making it his second #1 dance club hit. You could say he’s had a very good year and a half.

One of the most mesmerizing and infectious dark tracks of the year is “Piece Of Your Heart” by Meduza featuring Goodboys. This song is an earworm that burrows into your brain and takes up residence while on repeat. Meduza followed up this monster hit with the same song but this time featuring the added vocals of Becky Hill in a reworked version called “Lose Control.” That version also topped the charts later in the year. I’m not certain, but this may be the first time two different versions of the same song topped any chart — but, I could be wrong.

The artwork for volume two of the Year In Dance features the top Hot Dance Electronic Songs Artists. This is a chart that I only muse with passing interest as it usually has some overlap with the Dance Club charts but is geared more towards streaming, YouTube plays than anything else to compile its listings. In fact, Billboard has multiple sub-category charts under this, which frankly is redundant. This particular chart is important in that it features top songs that fare poorly on the Dance Club chart but often have more uptempo House versions that accompany them.

Marshmello appears to hit all the charts (including Top 40), while The Chainsmokers frat boy electronic dance music generally rules this chart, sometimes Top 40 but not Dance Club. The chart itself is often stale and lists songs that are over a year old — generally because of their ongoing streaming numbers.

Since a few of the Top 10 artists in this category never crossed over to Dance Club or were riding high from last year’s releases — I threw out three of them out and picked up three more from the Top 15. From left to right there’s Kygo, Ellie Goulding, Avicii, Martin Garrix, Calvin Harris, Marshmello, Swae, The Chainsmokers, Bastille, and Bebe Rexha.

One of the greatest DJ/producers of the modern era passed away. Avicii was a genius whose music moved millions of people on dance floors and festivals worldwide. Never content to rest on one style of music, he continued to experiment and even brought in folk music to create giant songs like “Wake Me Up.” The song “Levels,” which samples the vocals of the fabulous Etta James is a masterpiece in electronic dance music that will live on through the ages. He will be sorely missed.

Party Favorz is currently working on the third and final volume of the Year In Dance and expect to have this out on Monday. I’ve already begun compiling mashups, bootlegs and roof-raising tracks for the annual “Blow Your Own Horn” and hope to drop that Saturday of next week. Until then…ENJOY!

We have finally arrived at the fourth and final volume of the 2014 Time Capsule and this one is a whopper!  This …Read More, Stream and Download

Pushing forward with the second set in the year-end recap I tried to mix it up a bit. Starting with the somber …Read More, Stream and Download

Finally kicking out the last installment of the Time Capsule 2K13 series. After working on all four sets for the past several …Read More, Stream and Download