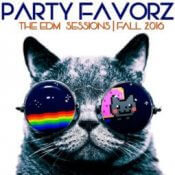 As you may be able to tell from the Party Favorz release schedule this week, I’m trying get everybody in the Fall mood by putting out early releases of the three core genres (House, Circuit and EDM) from the site.

The Fall 2016 EDM Sessions completes that trifecta ensuring you have more than enough to fuel the next couple weeks of your leisure time. That being said, let’s get right into it.

We kick things off with a couple of new remixes for earlier hits. Flume’s Never Be Like You was a slow burner through the summer but most of that was due to very poor official remixes on its initial release. Once the bootleggers got on board, great remixes began to appear. I’ve been all over Ariana’s Into You since its release, though I don’t think this did as well at radio as it probably should have but I love it just the same.

Lady GaGa’s Perfect Illusion is what held up the post this morning. To be honest, I don’t think this song is a strong candidate for an initial release off of her forthcoming album. I just can’t get into the original version as there’s nothing there to reel me in. The early mixes fare better and at least provide some muscle behind the track. Regardless, I think this song will struggle to make it into the Billboard Top 10 and will likely sink fast if it’s that lucky. I am not a GaGa hater but I’m keeping the faith that her album will be far better than this initial release.

Barry Harris who is regularly featured in my Circuit sets has been doing some equally stellar remixes that perform better under the EDM genre. They are catchy, upbeat with the same pop sensibility he uses in all of his mixes but without that whole tribalistic feel. For that reason, I’ll start including some of his stuff here instead of the Circuit sets. In this case, his take on the massive Closer by Chainsmokers and his brilliant upbeat version of This Girl by Kings vs. Cookin’ on 3 Burners really shine within the confines of this set.  Personally, I think it’s time the major labels start giving him a serious look because he’s setting the gold standard for what electro-pop-dance should be.

JES is back and in a BIG way. One of the queens of Trance and very well respected DJ in her own right, teams up with Tom Fall in what is certain to be her next number one Billboard club hit. Come Back could be considered exactly that. It’s been several years since her number one remake of the Cure’s Love Song, so we welcome her back into the clubs.

I don’t really follow artists and their ups and downs or disappearances, but it’s apparent Craig David has been M.I.A. for some time now. Well folks, he’s back with the Sigala produced Ain’t Giving Up and his vocals are as pure as ever, while the song is pure catchy-house bliss. If this fails at radio and in the clubs then there is something seriously wrong with programmers.

I’ll finally be taking the two weeks off that I was denied in late August due to circumstances beyond my control. No worries because if subscribers have an issue, be sure to reach out to me through the contact section of the site so I can help resolve any problems you may be experiencing.

I hope everyone has a fantastic weekend and as always …ENJOY!

Volume 2 of Time Capsule 2012 has many of my favorite songs of the year. P!nk, Eva Simmons and Sander Van Doorn …Read More, Stream and Download

It’s that time of year where I bring you the BIGGEST dance club hits of the Summer with Summer Beach Party which …Read More, Stream and Download