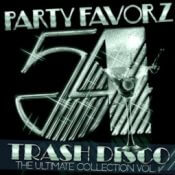 As we near the end of the Trash Disco the Ultimate Collection series, we can only reminisce about better times. In a world where fascism is starting to take hold over our everyday lives, inch by inch which gives way to mile by mile, we become more aware of our rights as a free society which begins to steadily erode. If you have been too busy keeping with what our government has been up to, at some point, it’s going to hit you like a hammer. I am seriously not being alarmist, rather practical in what I see as government systematically disabling all the freedoms and protections we as free people hold dearly.

Despite never owning nor shooting a gun in my entire life (short of a BB gun), I’m seriously considering taking lessons and purchasing one for Rick and myself. When right-leaning lawmakers start talking about 2nd Amendment remedies if elections don’t go their way, I have no other conclusion to draw as to what they’re inferring. Take it seriously.

The current climate is far worse than ever imagined during the 1970s because it’s hidden under a facade of a growing economy, which most economists are expecting to come crashing down as early as 2019. We have a chance to reverse course but only if cooler heads prevail and rid ourselves of those that would do us harm all in the name of power, money, greed and special interests. History has a way of repeating itself, but this time on a much grander scale. All the elements of Watergate and the rise of Nazi Germany are right in front of our eyes. People shrugged it off then as well until it was too late.

This collection of Disco classics is designed to allow listeners to escape into another world that’s carefree and harkens back to another (hopefully better) time. All I ask is that you source your news wisely and read about what’s going on around you at every level of government. For fuck’s sake, don’t get your news from Facebook, which is replete with false stories designed to inflame your worst instincts. From local to state and at the federal level, you will be shocked at what our leaders are doing, laws they are passing, and by how much of our society is being run by the top 1% of the country that does not have your best interest at heart. We really are living in the scariest of times and I’m doing my best to help alleviate as much as possible with my podcasts.

Those that follow Party Favorz regularly already know my positions on social issues and that I tend to preach from time to time. It’s my blog and I can do whatever the fuck I want. Take it or leave, that’s your choice. For the moment, I’ll digress and step down from my soapbox.

In the meantime, please soak-up this 6th set of Disco Classics with all the love and enthusiasm that I’ve put into making them. I should be back sometime next week with the 7th and final installment. I’ve got a couple of other sets in the works before getting around to this year’s Jingle Electric and Holiday Edition. Until then…ENJOY!

21. Chic – I Want Your Love (Dimitri From Paris Remix)

26. Instant Funk – I Got My Mind Made Up (You Can Get It Girl) (SanFranDisko Rework)

32. Phyllis Hyman – You Know How To Love Me (Joey Negro Extended Disco Mix)

33. Tavares – Heaven Must Be Missing An Angel (Mikeandtess Edit 4 Mix)

In 2008, after having successfully created multiple feature sets for friends that included Everything But The Girl, Madonna, Kristine W, Christina Aguilera, …Read More, Stream and Download

Let There Be House marks the end of the 90’s House Classics series for the moment. I felt like I had neglected …Read More, Stream and Download

Surprise! As Party Favorz winds down our 10th year, I found myself with some extra time and decided to pull together that …Read More, Stream and Download