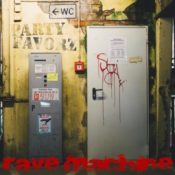 As promised, I’m dropping “Rave Machine,” the latest from the Underground House series and this one is a thumper! It’s definitely darker than past efforts but looking back, that seems to be the norm around this time of year. I did my best to flesh it out with some Prog-House and Techno to keep it interesting. However, I’m beginning to wonder if the Tech House genre has maxed-out its potential.

You folks know that over the years I bitch and moan about the state of the “hot dance genre” of the moment. Whether it be big room EDM anthems with the anticipated drop, the commercialization of Deep House which peaked in 2014 before rebranding itself “Future House” and the more recent Reggaeton trend, which wore out its welcome over a year ago (at least after “Despacito” was a worldwide hit).

While Tech House hasn’t actually crossed into the mainstream, its popularity has swelled considerably to the point that there’s just not a lot of originality coming out of its ranks. To be clear, there are some great tracks (included here) but its best to try to mix in other genres to keep things interesting.  I may even go back and take a stab at the “Spin Me Around” set I put out in 2017, which incorporated a HUGE swath of genres that normally don’t work well together in a set but for whatever reason, I managed to pull off. I enjoy the whole unpredictable nature of sets like that, that also lend themselves to what my music sets are mainly about: having a party. We’ll see.

If you want a better take on my thoughts, read “The Epic of Passable Tech House” by Michael Sundius. He touches on the very same things I’ve been whining about for years but does it with more panache and colorful writing than I can muster.

To any of the artists included in this set, please do not be upset. I ain’t ragging on you. You wouldn’t be included if I didn’t think these tracks were stellar. Quite the opposite.

Take this writing for what it is but don’t let it sway your opinion. I worked this motherfucker out and if you’re a fan of this series, you won’t be disappointed.

As I promised yesterday, I’m going to start work on the next commercial Dance-Club set, which you can expect to drop sometime late next week. Until then…ENJOY!

I have to tell you that I have been listening to this mix over and over and barely scraped the first two.  …Read More, Stream and Download

Folks, there has been a complete sea-change in the music that’s coming out. It’s like I’ve been fast-forwarded into another place and …Read More, Stream and Download

Back by popular uh, request …the Deep Edition is getting a new life in the form of the Deep Sessions. When I …Read More, Stream and Download

We’re half way through the summer deep series, and it feels like I’m just getting started.  While I like all of these …Read More, Stream and Download