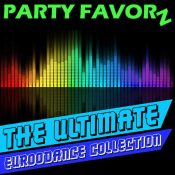 Party Favorz is back with volume 3 of the Ultimate Eurodance Collection, which features the biggest Eurodance tracks of the late 80’s through the 90’s.

It’s only in this particular series that a song like “Barbie Girl” by Aqua could be even remotely considered a classic. I’ve always detested this song, yet here we are. The same could be said for anything Vengaboys because all of their tracks were virtually identical. They utilized the same Ibiza beat that was hot at the time, and maintained few innocuous lyrics, but were catchy as hell. It’s this formula that propelled them to the top of the dance charts and many pop charts across the globe. I stuck with “We Like To Party,” which went on to be the theme song for Six Flags and “Boom Boom Boom” and left out the annoying “Up and Down.” They had several earlier hits but those three are what crossed-over in the North America.

Another track that follows the same formula is “Better Off Alone,” which actually spoke to me. I was head over heels in love with this guy named Pete at the time. We had a bitter split and when I’d hear that song, it felt like I was a sympathetic character in some John Hughes 80’s flick.

Some of these songs border on trance with Fragma’s “Toca’s Miracle” leading the way from the early millennium. N-Trance’s massive “Set You Free” was an introduction to Drum & Bass with a bit of Freestyle and Trance thrown in making this song really stand out. Duke’s “So In Love” is a massive house music staple with overtones of Eurodance but is nevertheless a personal favorite, thus its inclusion.

Rozalla’s “Everybody’s Free (To Feel Good) and Billy Ray Martin’s “Your Loving Arms” are a natural fit here even if the latter was naturally house. I’ve also included the early Abigail classic remakes of “Losing My Religion” and “Constant Craving,” which were on a small label imprint but had a massive impact by bridging commercial Trance and Eurodance with familiar songs originally sung by other artists (REM and K.D. Lang).

Speaking of which, no set would be complete without the epic Bonnie Tyler classic “Total Eclipse of the Heart” by Nicki French who transformed the powerful ballad into a massive floor-filler combining elements of Hi-NRG and Eurodance.

There’s a lot of happy memories to unpack in volume 3 and there shouldn’t be anything that you aren’t already intimately familiar with.

I want to give a MASSIVE shout out to Anthony S., Glenn A., and Raul G. for their much needed donations. Still, that leaves me short $175. Folks, you don’t need to donate a massive amount of money to help Party Favorz reach our goal of $500. The recommended amounts when you land on the donation page are just that. There’s a box at the end that allows you to enter ANY AMOUNT of your choosing and that you can afford. I realize that not everyone is a walking ATM and definitely appreciate the support I receive from subscriptions but there’s just not enough money there for me to cover my annual hosting costs. If all you can afford is $5 — I’ll happily accept it. Whatever it takes to help me keep Party Favorz going for at least another year. I promise, you won’t be disappointed.

I’ll be back tomorrow with the 4th and final installment of the Ultimate Eurodance Collection. Until then…ENJOY!

5. Vengaboys – We Like To Party (The Vengabus) (More Airplay)

As promised, I’m sending up the sixth and final set in the Millennial House Classics series and this IS  a monster!  Movin’ …Read More, Stream and Download

My father and I have a Sunday ritual calling each other to catch up on the previous weeks’ personal and political events.  …Read More, Stream and Download

Welcome to the annual X-mas Dance Mix for 2019! I spent the better part of Thanksgiving working on this set because dinner …Read More, Stream and Download