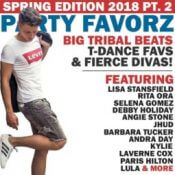 The Spring Edition 2018 pt. 2 is chock-full of big tribal beats, t-dance favorites, and fierce DIVAS! Overall, the set is more restrained than previous offerings which is an effort to mix things up a bit.

I’m releasing this set a week early because if I sit on it, I’ll be tempted to add new things or muck-around with it which I hate doing when it’s already perfection.

For the most part, I am musically spent at the moment. That is, we’re at the bottom of the barrel when it comes to new tunes. Sure, there are few new dance-club releases that are surefire hits going into the summer but not near enough to justify a new release. Same goes with funky disco house. Truth is, folks have been digging on the Holiday Edition 2017 and Disco Dust for a while as the numbers for my latest releases are just now starting to inch up.

I get it, my output is generally way ahead of the charts and the clubs as I like to strike well before these tracks hit big. It takes several months for folks to catch-up.

From here, I think we’re going to cool things down a bit and let all this new stuff I’ve already put out digest. There’s more than enough new music to keep everyone entertained (distracted) for a while. I’ll resume things once I enough selections start coming through again.

I have since moved everything over to our new host, which doesn’t affect the operations of the site. I’ll be tinkering around with the site and begin working with Spotify to see about getting the feed re-added to their listing. Basically, just general background stuff.

I want to give a shout-out to Paul B, Brad C., and Andy M. for their recent donations. They’are ALWAYS appreciated!

I hope everyone has a fabulous weekend and as always…ENJOY!

With a massive heat dome sitting over 2/3 of the country this weekend, I can’t think of a better way to cool …Read More, Stream and Download

T.G.I.F. Ah yes…made it just in time for the weekend! This was no easy feat. Before I get on with the usual …Read More, Stream and Download

I’ve got the Spring Edition on tap for you folks. I know you boys have been waiting for something new to jazz …Read More, Stream and Download