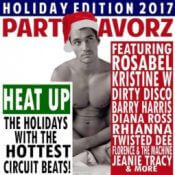 Folks, this set is BIG and I when I say big, I mean HUGE or better yet EPIC! In fact, this is quite possibly the best set of circuit tracks to come out simultaneously in like forever.

I kick things off with the Offer Nissim remix of the Trash Mermaids’ “Cryptic Love.” I know absolutely nothing about this group, this track or anything about this song other than I absolutely love it! I equally adore the Dave Aude remix featured on the recent EDM/Dance set Jingle Electric pt. 1. There’s just something about the obscurity and misunderstood meaning of this song coupled with catchy riffs that just does it for me.

This is followed-up by quite possibly the best remix Spin Sista has laid-down, EVER. They, he, she, it delivers an early millennium circuit remix of “Revival” by Ange Lloyd featuring Adam Martin that’s worthy of Hex Hector, Thunderpuss and Jonathan Peters. Not to overuse the word but it really is EPIC!

Speaking of which, our favorite Latin DJ Ranny pulls another masterpiece out of his tight ass with “Queen of Peace” by Florence & the Machine. I don’t know what it is about F&TM and Ranny but the two are like a glorious match made in circuit heaven.

Keeping within the realm of larger than life tunes, Barry Harris pulls out all stops on Imagine Dragons “Thunder.” While the catchy tune stands on its own, Barry throws in a magical Thunderpuss build-up that really gets the adrenalin building before dropping into a drummed-up slap-beat of the original and then builds it up again, finally taking us out.

The fact is, Barry Harris is all over this mix. His output has been staggering with damn-near perfect consistency. He appears to have found that balance in remixing that play well to a circuit, EDM and even the t-dance crowd. At the end of the day, there isn’t anyone coming close to the magic he’s creating making him a much sought-after producer.

With that said, don’t think this set is all about Barry. Tony Moran does some of his best work in a while with “Zum Zum” by Sasanya. Our favorite boys from Houston, Dirty Disco (who are starting to give Barry a run for his money) bring it with Joe Moda’s “Pout” out now on Swishcraft and “To the Dancefloor” with everybody’s favorite underground Queen Celeda.

Hottie, Joe Gauthreaux has been teaming up with Leanh lately and really deliver a surprisingly good remix of the Diana Ross classic “Aint No Mountain High Enough,” which should get all the circuit boys joining hands in dance floor unison. Twisted Dee has also really been impressing us with her remixes of “Lose Control” by April Diamond and “Boom” by Emily Perry.

There are so many great tracks out at the moment, about a third of them had to be left in the crate. Now you can understand why I had such a hard-on and was constantly plugging this upcoming release. I’m talking MOMENTOUS!

Since this set is being released a few days early, I have another EPIC unannounced surprise for everybody dropping on Friday. You’ll have to wait to find out what it is.

If you’ve attended any circuit even in the last 10 years, you’ve undoubtedly danced to the euphoric sounds of Toy Armada and …Read More, Stream and Download

I feel like I just ran a marathon.  In two weeks, I’ve managed to create a new site, which is pretty kick-ass …Read More, Stream and Download

Back on board with part 2 of Circuit Anthems & Pride Classics with a couple of bootlegs from past Pride years. Barry’s …Read More, Stream and Download

I guess I should stop making promises for a certain date, as things inevitably come up.  At least I’m only a day …Read More, Stream and Download