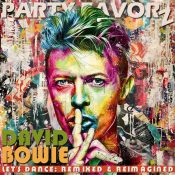 David Robert Jones (8 January 1947—10 January 2016), known professionally as David Bowie, is one of the most influential artists of the 20th century. Fueled by a range of musical styles, Bowie often projected a variety of personalities depending on which project he was working on and where his musical interests lay at the moment. From Glam Rock, to Disco and everything in between — he achieved massive success with his art that affected millions of lives with each evolving iteration.

Since his death in 2016, Party Favorz has received many requests to create a Legacy set featuring his work. Given the substantial output and variety of his catalog that literally goes back to 1969 — it was near impossible to do any justice to the legacy Bowie has left us — until now.

There’s no doubt he would have gravitated toward the current electronic movement and even began remixing his work in the early 90s.  That being said, with a variety of music styles and the ability to capture the true magic of his work — it is near impossible to recreate.  Nevertheless, I persisted and pulled off something special for hardcore fans (such as myself) that at the very least extracts multiple highlights of his career even if it’s not all-encompassing. Frankly, a good portion of his catalog would be near impossible to translate to the dance floor. I have to admit, the Julian Marsh remix of “Space Oddity” and 7th Heaven remix of “Rebel Rebel” are spectacularly executed, as well as several others.

I cannot deny the emotions that overwhelm me when I listen to his music as it brings back a flood of memories — some good, while others, not so much. It just proves that Bowie’s music will stand the test of time.

It is with much love and respect that Party Favorz honors David Bowie with his own tribute to dance music. Some may consider this tribute blasphemy but there’s no doubt this would have been his next act. RIP Ziggy.

8. This Is Not America (Italobros Remix) [with Pat Metheny]

10. Just For One Day (Heroes) (Extended Version) [vs. David Guetta]

One of the hottest club music remix and production teams at the moment is Dirty Disco. Longtime rivals, friends, and now business …Read More, Stream and Download

This set is part of a two set tribute to Frankie Knuckles.  You can view the Silver Edition by clicking on the …Read More, Stream and Download