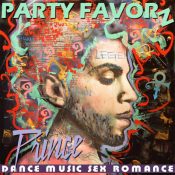 Whether he went by his official name Prince Rogers Nelson, The Artist Formerly Known as Prince, a symbol that represents both the male and female genders

or just The Artist — we all know the man by Prince.

Prince was an American singer, songwriter, musician, record producer, dancer, actor and filmmaker. He was a prolific writer and recorded so many songs that his fight with Warner Brothers lead them to put the breaks on his releases for fear of oversaturation.  He often gave songs away for free under different pseudonyms like “Manic Monday” by the Bangles (Christoper), “Sugar Walls” by Sheena Easton (Alexander Nevermind), “Jungle Love” and “The Bird” by the Time (The Starr ★ Company). Also, his music was  covered by other artists — most notably “I Feel For U” by Chaka Khan, “Nothing Compares 2 U” by Sinead O’Connor and even the John Cougar Mellencamp produced “When You Were Mine” by Mitch Ryder among many others.

Prince also produced several acts like the Time (mentioned above), Sheila E (Glamourous Life) and Vanity 6 (Nasty Girl) as well as a host of others.

Ultimately, Prince was one of a dozen artists that literally provided the soundtrack to the eighties. With musical styles that ranged from Funk, Rock, New Wave, Soul, Psychedelia, and pop, he was the considered the quintessential artist in that he drew his inspiration from people like David Bowie, James Brown, Sly & the Family Stone, Jimi Hendrix, George Clinton, Miles Davis among many others and it showed in his music and performances.

In 1985, I was living in Austin, TX and working as a copy clerk for the Austin American Statesman and part-time for Hastings Records in the mall. We frequently received free tickets to concerts and Bruce Springsteen and Prince were playing within weeks apart from each other. I was a fan of both artists but there were only so many tickets to go around so I opted for the Prince tickets. These were for his Purple Rain tour and my best friend Dan and I went to the concert where he put on a 2-hour funk and rock extravaganza like we had never seen. His performance was a once in a lifetime experience and has stuck with as one of the most memorable I had ever attended.

There is just way too much to cover about this man and his genius that hasn’t already been written. The contributions that Prince has made to music, his guitar skills, his songwriting his production, his everything makes him one of the most admired if not influential artists of all time. While most of the tracks in this set stay fairly close to the originals — they are presented in their long form and re-edited for easy DJ mixing along with some notable modern-day remixes by Kue who did an outstanding job modernizing “Controversy” and “Purple Rain” for the dance floor.

It is with much love and admiration for the man known as Prince that Party Favorz finally pays him his due respect with this tribute. RIP my friend.

1. I Wanna Be Your Lover (Hot Classics Remix)

11. U Got the Look (Hot Classics Remix) [with Sheena Easton]

David Robert Jones (8 January 1947—10 January 2016), known professionally as David Bowie, is one of the most influential artists of the 20th …Read More, Stream and Download

Following up on yesterday’s post, I’ve got the final installment of Catching Up with DJ Meme.  The majority of the songs in …Read More, Stream and Download