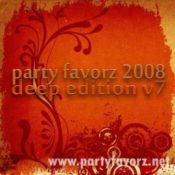 Those of you that follow this edition may be asking yourself…volume 7?  Thanks to our good friend Klaus a.k.a. DJ K-Os who pointed out that I skipped volume 7 and went straight to 8 & 9, I decided to correct that.  Granted, it jumps out of place, but better late than never.  If you’re looking for the more progressive version of the Deep series, this ain’t it.  I decided it was time to go back to the dark side.  No, not the “Luke come over to the dark side” rather some deeper house music, which is what this series was originally intended to be.  I’m thinking that I may rename all of the series in 2009.  For instance, Electro-Funk will be called the ‘BPM Edition’, Progressive the “System Edition’, Classix the ‘Chrome Edition’, Deep the ‘Chill Edition’ and the circuit mixes will remain the same.  I haven’t come up with a name for the ‘House Edition’ yet only because all of the aforementioned represent a dance station on XM Satellite radio and there isn’t one for just good ole house music.  This is tentative, so don’t hold me to it.  However, if you like the idea, let me know.

Rather than go all doom and gloom on this mix, I purposely changed it up a bit.  The first mix has a lot more color with a few sprinkles of gray dropped into the mix, while the second mix is primarily gray tones with a few colorful spots to round it out.  When I say gray, I actually mean deep house and colorful is closer to good old fashioned soulful house.  As the days get cooler and darker (as it has been for several days around here) I don’t want to send anyone (muchless myself) into an early holiday depression, so I thought I’d mix it up a bit in case the grayer tones of deep house start to bring you down.  Actually, I finished this up pretty quick last week and have been enjoying it since the weekend at home and in my car.  So, please give some feedback if you like the direction I took this time.

In other news, I want to thank everyone that responded to my call for ‘guest DJs’.  I have to say, I was a bit shocked, if not overwhelmed.  What you can expect between now and the end of November are a variety of outstanding mixes by DJs all across the globe.  From the U.S., UK, Australia and Germany I pretty much have it covered.  Some of you are up and coming, others have been successfully working it for a long while now, others have their own radio show and another already has management, complete with headshots and a brand new album about to drop.  How cool is that?  All I can say is welcome to the Party Favorz family!  I will be more than happy to promote you and your work over the next couple of months.  At this time, I will have to decline any further requests to join as I’ll be doubling down on the posts starting in October.  Don’t worry, I’ve got something really big by the end of the year that I’ll announce at a later date.  What I will say is that it will allow everyone to participate and share their mixes, their ideas, perspectives, tips and tricks.  Stay tuned.

In the meantime, just sit back and enjoy the sounds of the underground.  I’ll be back tomorrow with Take 2 of this mix. Enjoy!

Just finished Deep Edition 2007 v3 a few days ago. Starts off with some nice low key house, which builds on top …Read More, Stream and Download

It’s been one heck of a week that had me running around like a chicken with my head cut off.  After having …Read More, Stream and Download

As promised, I’ve got the third installment of this series for you guys (and gals).  Unlike its predecessors, this mix is darker …Read More, Stream and Download

Party Favorz has reached our goal for the funding needed to continue hosting this site. Massive thanks to all the donors who …Read More, Stream and Download