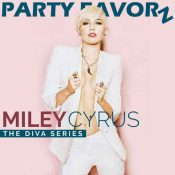 Most folks know through her highly successful turn on Disney’s “Hannah Montana” series and subsequent movies. Not unlike previous Disney prodigy’s (Britney Spears, Christina Aguilera, and Demi Lovato) — Miley grew up in front of the public view and slowly began to move away from the good-girl image that was created for her and it showed in controversial live performances and in her music.

Truth be told, her audience was growing up with her and the subsequent lashing out by “moms” was more about them then their children who related to her antics. Often times these antics came across awkward and frankly — not as overly sexualized as the pearl-clutching mothers would have you believe. That mantle still belongs to Christina Aguilera who by her second album shed all pretenses when she dropped the video for her first single off her second album entitled “Dirrty.”

While Cyrus came out swinging with several hit singles from her first two albums — after reprising her roll as Hannah Montana for the movie, later that year she dropped “The Time of Our Lives” featuring the smash hit “Party In the U.S.A.” By the time “Can’t Be Tamed” she was clearly breaking free from her ties to the wholesome character she portrayed for so long.

Grown-ass woman makes good on her promise as an artist

After taking several years off — she returned in 2013 with the massively successful “Bangerz” featuring some of her best work to date including the hit singles the Trap influenced “We Can’t Stop” and beautiful “Wrecking Ball.” Miley had finally arrived and on her own terms.

With a diverse catalog of musical styles and her embrace of dance music and a powerful ally to the LGBTQ+ community — Miley was an obvious choice for inclusion into our Diva Series.

Frankly, I wasn’t certain how this set would work but it just fell together with ease and is something I’ve had on repeat for over a week. It is my greatest pleasure and fawning admiration that Party Favorz officially inducts Miley Cyrus into the Diva Hall of Fame. ENJOY!

5. Nothing Breaks Like A Heart (Division 4 & Matt Consola Remix) {with Mark Ronson]

9. Who Owns My Heart (The Alias Club Mix)

18. On A Roll (Junior Vasquez Extended Remix) [aka Ashley O]

Over the decades, there have been plenty of girl groups that wrangled the public’s attention. The Supremes or Diana Ross & the …Read More, Stream and Download

This has been a long time coming for this multi-platinum and Grammy-winning artists. Toni shot into fame in the early 90s after …Read More, Stream and Download

Obviously, I missed my deadline for releasing volume 3 of Madonna’s Immaculate Bootleg Collection — all I’ll say is that good things …Read More, Stream and Download