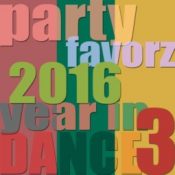 Even with its seismic shifts, 2016 was a really good year for dance music. Rihanna had a particularly great year with one release after another from her stellar (if not underappreciated) ‘Anti’ album. ‘Work’ and ‘Needed Me’ were standout tracks but her collaboration (again) with Calvin Harris really took the prize. ‘This Is What You Came For’ co-written with Calvin’s ex Taylor Swift is one of the top songs of the year. Much like their work on the 2011 ‘We Found Love’, TIWYCF is one of those songs that hit’s you between the eyes and translates so well to the dance floor.

Justin Bieber was another artist that blew it out in 2016. Already riding high from the 2015 release of ‘Purpose’, his single ‘Sorry’ released late that year was like the song that just kept on giving. Shortly thereafter “Love Yourself’, which was more of a dis to a spurned ex, invoked a re-working of the lyrics by fans (NSFW) at his concerts. But, it was his collaboration with Major Lazer ‘Cold Water’ and DJ Snake of ‘Let Me Love You’ that secured him as one of the top artists of the year. No matter what you may think about the Biebster, the guy is talented and has hooked up with some of the most stellar producers in the industry during this new wave of musical styles.

Arguably the BIGGEST artist of 2016 goes to The Chainsmokers. After their breakthrough ‘#Selfie’ in 2014 with the strong follow-up ‘Kanye’, they released their debut album ‘Boquet’ in late 2015. Spurred by the massive success of ‘Roses’ each subsequent released topped the next. ‘Don’t Let Me Down’ was even bigger but it was ‘Closer’ that sealed the duo as EDM kings with a pop-sensibility the major labels had been creaming their pants for. Sorry Zedd, but these boys beat you to it.

With only one more set to go, we are down to the wire with the biggest dance hits of 2016. I want to thank Gary B. for another $25 donation into our coffers. I also want to thank one of our followers for pointing out the issue with the donation plugin in Firefox. It does work, but the fields are blank until you begin typing in them at which point it reveals what it is you’re supposed to be typing. I’ve created a support ticket with the developers but don’t expect to hear back until after the holiday. In the interim, it may be best to use Chrome, Explorer or Safari but Firefox will work just fine if you don’t mind stumbling through it.

I’ll be back tomorrow with the fourth and final installment of the Year in Dance 2016. Until then…ENJOY!

Got a lot going on today but I promised a post even if the site isn’t ready yet, so here it is.  …Read More, Stream and Download

Formerly the Chrome Edition 2003, this set is being made available for the first time since 2009 under the category Year-End Edition, where it belongs.

Epic, momentous, ostentatious are just some of the words used to best describe a majority of the productions coming out in 2000. …Read More, Stream and Download

First, the HW17 actually has nothing to do with Halloween. No spooky tunes or effects, just plain ole Top EDM & Dance …Read More, Stream and Download