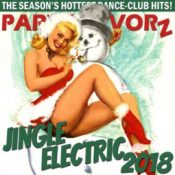 It’s that time a year again, where Party Favorz delivers one final massive Dance Club set of the latest hits currently on your radar or soon will be.

In keeping with tradition, I like to use a vintage holiday-themed pin-up girl for the artwork of which there appears to be no shortage. Don’t hate on me for using something many would consider sexist. I’m just a big fan of all types of vintage advertisements and especially the ones geared towards gay men, which I find hilarious (given the obvious nature of the ads and the time that they were released).

Jingle Electric 2018 expands on the direction I’ve been moving the Dance-Club series in but takes it even further. Let’s face it, I don’t want to hear a couple of hours of the same-old thinned out female (or male) voices over a drab reggaeton or EDM beat over and over until everything becomes blurred, any more than I want to hear back to back Trap songs that all sound the same. YAWN!

This time around, I’m delivering the hits along with some under the radar tracks that are either independent or on small labels and that don’t necessarily get the exposure they deserve but are seriously worth a spin. I took this further and included tracks that would normally reside on one of my Underground House or Funky Disco House sets to break things up.

Since I typically don’t release these types of sets past November and was sitting on some really solid tracks that I was itching to use, I dropped them in. The end result…is nothing short of FABULOUS!

So, if you’re go-to genre is the Dance-Club series and you haven’t been paying attention to the other two categories, get prepared to get schooled. By dropping a variety of genres in that include commercial dance-club tracks along with some Tech and Funky House, you’re in for a real treat that you never knew you wanted; that is, until now.

You’ll also notice (depending on your age or musical knowledge) that about a 1/3 of the songs are either classics tracks remade or heavily sample them to create something totally new. I was going to list them all for you, but there are really so many, it would take up an entire page to list everything and their origins. Just know, there is a bevy of ’80s and ’90s influences contained herein as well as ’70s and even early millennium. As I’ve always said, what’s old is new again.

There is one group that I do want to put on everyone’s radar (especially if you’re a fan of Indie Rock music like I am) is Bang Bang Romeo, who’s remixed track “Bag Of Bones” is included in this set. The promos showed up in one of my music services and I was just blown away! I checked out a couple of their videos and this group has got the goods. The centerpiece of BBR is powerhouse vocalist Anastasia Walker backed by Ross Cameron (guitars) and Richard Gartland (drums) who provide a true garage experience. The music is sharp, insightful, and well-written and I fully expect bigger things for them when their first full album drops next year. For now, you can pick up their EP on iTunes or stream it on Spotify. I have no relation with this group, their label or their management. I just love to promote damn good music.

I want to give a HUGE shout out to Lynn H, Glenn A., Mike M., Gene R., and especially Anthony S. for their generous donations. You are all very much appreciated!

With all that said, I’m in the process of putting together this year’s final Circuit Tribal House set for the annual Holiday Edition. Expect that to drop sometime next week before I start rolling out the Year In Dance for 2018 featuring the year’s biggest dance club hits! As you can see, we still have a long way to go and this year ain’t even over yet.

After being stuck in traffic earlier for hours and having the opportunity to really preview this set, I decided to go back and make some edits. A total of five songs have been removed from the original post; 4 were outstanding funky house tracks that ruined the flow and will be saved for a later day and the 5th was the horrendous rendition of the Laura Branigan classic “Self Control.” How that ever slipped passed my radar is dumbfounding, because the overall production is terrible and the vocalist has no business singing ANY Laura Branigan track whatsoever. That is no way to honor the memory of one of pop’s finest from the ’80s with a poorly-rendered karaoke version.

I’m sending up the annual Catch-Up, which is our mid-year set featuring the biggest dance hits of the year so far.

As the days just keep getting better, so does the need to P-A-R-T-Y like it’s 2010! In keeping with that theme, I’m …Read More, Stream and Download

I bet you guys think I went off and forgot about you.  Well, I didn’t.  Things have just been a little hectic …Read More, Stream and Download