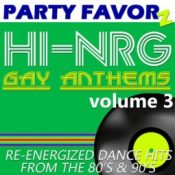 Happy Monday or maybe not. If it’s bitterly cold, snowing or iced-over where you’re at never fear as Party Favorz is here to put a little sunshine in your day with Hi-NRG Gay Anthems volume 3!

This set pulls from both decades with a few caveats. The late Viola Wills who got started in the clubs in the early 80’s with hits like “Gonna Get Along Without You Now” and “If You Could Read My Mind” (a remake of the Gordon Lightfoot #1 early 70’s classic) is featured here with her rendition of  the 1930’s torch classic “Stormy Weather” turning it into a hi-energy floor stomper that pulled all the gay boys to the floor.

As for “If You Could Read My Mind,” the dance version initially brought to life for the dance floor by Viola was re-worked by Amber, Jocelyn Enriquez, and Ultra Naté aka Stars On 54 and produced by Hex Hector for the movie Studio 54. I used the version by the fabulous Soraya Vivian who under the Fierce Angel imprint has created some fantastic classic remakes with her soaring vocals.

Nicki French took over for Bonnie Tyler with her rendition of “Total Eclipse of the Heart,” which was a massive dance hit in the early 90’s and given the Almighty treatment. Equally, Martha Wash re-sung “It’s Raining Me” sans the late Izora Rhodes.

Frankly, there are a plethora of 80’s classics in this set that should be instantly recognizable even to the average listener. However, one song that I have to mention is the feminist anthem “I’ve Never Been To Me” by Charlene, which was oddly written by two men (go figure). Charlene was the only white artist signed to Motown Records, and the song was initially released in 1977 and 1978 barely cracking the Top 100. It was re-released again in 1982 where it topped at #3 on the charts for several weeks and was the only hit Charlene had recorded but had a lasting impact.

The cheesy song gained popularity again when it was included in the 1994 movie “The Adventures of Priscilla, Queen of the Desert” and has been a drag queen favorite ever since. Charlene re-sung the vocals but used the altered lyrical section of the song (I spent my life exploring the subtle whoring that cost too much to be free) for the dance version.

The truth is, I could go on and on about the origins of various songs and the singers behind them, but my guess is you want to get to the music. In the end, it’s all about the memories and lots of fun!

I’ll be back on Wednesday to close out this series with volume 4. Until then…ENJOY!

Before I forget, I want to give a HUGE shoutout to Anthony S. and Paul S. for their generous donations. The only thing I ask is not to let the well run dry before I decide to renew my host in April for another year. If I do, that’s when I’m going to need the money. Nevertheless, this is going to help me dig up some rare treasures for the (as of now) planned significant Madonna celebration multi-series collection I have on tap for August. If I make it that far, this will be the most comprehensive and worthwhile series I’ve ever put out for any artist that will be cherished for decades to come. Full stop!

11. Madonna – Into The Groove (Love To Infinity Special Edition Mix)

14. Fierce Collective feat. Soraya Vivian – If You Could Read My Mind (Degrees Of Motion Mix)

I decided I wanted the Party Favorz site to match the residence, so I went ahead and decorated it on both fronts.  …Read More, Stream and Download

I logged into work this morning only to be kicked out, which left me scratching my head. I went back and checked …Read More, Stream and Download

As promised, I’m serving up a whole plate full of cheese this week. While last week’s Eurodance set focused primarily on a …Read More, Stream and Download