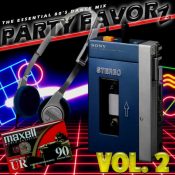 After much hair-tearing, sleep deprivation and overall frustration — Party Favorz is finally back with volume 2 of The Essential 80’s Dance Mix. I only say this because I was trying to pick up a great variety of the biggest dance hits of the era but it’s not as simple as it sounds.

I had mentioned in my previous post how musical styles tend to spill over into the following decade before the actual defining sounds appear by the fourth year going forward — I had forgotten about the Hi NRG boom of the early part of the decade. This sound adapted the synthesized nature of music that had been previously dabbled with by the likes of Giorgio Moroder, Cerrone and even Peter Brown.  By 1980, it hit its stride with the remix of Patrick Cowley’s 1980 remix of Donna’s Summer’s “I Feel Love.” Patrick went on to lead the genre with multiple club hits like “Menergy,” “Megatron Man,” and the era-defining sound of the gay movement “Do You Wanna Funk” by Sylvester (which is included in the Trash Disco Series).

Tracks like Paul Parker’s “Right On Target,” Evelyn Thomas “High Energy” (which was the basis for Frankie Goes To Hollywood’s “Relax”), Miquel Brown’s “So Many Men, So Little Time” and a multitude of others. The problem I have with these tracks is not that they didn’t define a movement throughout the decade but that the production values wore poor if not downright cheesy and didn’t really quite fit in with the music that defined the era. Most of them were on independent labels that didn’t have the budget for quality productions. Almighty Records has done a remarkable job of updating many of these tracks, which have been featured on my Hi NRG series.

Regardless, I may go back and whip up a single set of the original versions of the biggest tracks from this era. They not only defined the gay community but provided the soundtrack to the era that spawned AIDS, which devastated our community. These songs represent a soundtrack to a certain place and time deserve to be honored in their own right. If anything, Patrick Cowley deserves to be honored for the movement he helped create as he was one of the earliest victims to die from AIDS in 1982 before it even had a name. Sylvester died from the disease in 1988.

As for this second set of 80’s dance music classics, I think I finally hit my stride while still mostly keeping to my original mission of mixing up the commercial alternative and pop-hit dance tracks. It may be odd to hear Michael Jackson right next to When In Rome but it works.

Many of these tracks have been remastered by yours truly from their vinyl counterparts. As such, you may hear some clicks throughout but that only lends to its authenticity.

There are a couple of things I do want to point out. Madonna’s “Into The Groove” was shortened because there’s an entire section that’s a repeat but Hot Tracks thought it wise to overlap different sections of the song, which I found jarring. I just took it out altogether shortening the mix, which keeping everything still intact. Also, Whitney’s “Love Will Save The Day” had a lot of issues but there weren’t really any remixes of this track other than the housed-up Jellybean and Morales take, which does not belong. There is a minor skip in the second verse but it’s hardly cringing worthy. Usually, I can fix these if it’s repeated elsewhere but that was not the case here.

I’m running behind on these so I may very well have to put the remaining two sets off until November as well as the Junior Vasquez Legacy set I had promised. We’re already heading into the middle of October and I need to get out the next Dance Club and Circuit Tribal House set before Halloween. No worries. I’ll get everything done — it’s just that my timelines have changed.

The original upload has been edited down by almost 4 minutes for better cohesion and flow.

19. Blue Mercedes – I Want To Be Your Property (Razormaid)

25. Whitney Houston – Love Will Save The Day (Ultimix)

Party Favorz is concluding the Ultimate Eurodance Collection with volume 4 featuring many of the break-neck speed tracks that clock in at …Read More, Stream and Download

It’s the most wonderful time of the year (again)! That time where we stuff ourselves with turkey, fight over politics with family …Read More, Stream and Download

Happy Monday or maybe not. If it’s bitterly cold, snowing or iced-over where you’re at never fear as Party Favorz is here …Read More, Stream and Download