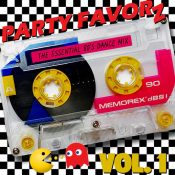 Party Favorz is finally back with our final entry into the 80’s Dance series. The Essential 80’s Dance Mix culminates the biggest tracks from the alternative dance sets Pure Energy, Pump Up the Volume, Hit That Perfect Beat!   and the Back 2 the 80’s two-volume set I put out last year.  I also included massive #1 club hits that may or may not be familiar to you since these weren’t radio hits and delved into the first half of the decade that was woefully underrepresented in previous volumes.

What I’ve noticed is that each decade starts off with overlap from the previous decade before hitting its stride in the genre(s) that go on to define the decade somewhere in the 4th and 5th years.  In the case of the 80’s, disco was still the driving force on the dancefloor for the first few years. Though, the elements of the synthesizer, beat machines all began to coalesce during the first part of the decade — it really hit its stride by the second half. You’ll find tracks like “Forget Me Nots” by Patrice Rushen, “Do You Wanna Funk” by Sylvester, “Funkytown” by Lipps, inc., Kool & The Gang, Evelyn King amongst others in the Trash Disco series where they rightfully belong.

During the mid-80’s, house music began its start in the underground venues of Chicago and NY before moving mainstream by 1989 with the #1 club and pop radio hit “Back To Life” by Soul II Soul. It went on to dominate the 1990’s and spawned a variety of sub-genres some of which proved to be extremely popular like Eurodance, which is due for its own essential series at some point.

Because of the massive undertaking of this series — you may find some of the transitions to be awkward as I swing back and forth between styles. That’s unavoidable.  For the most part — I’m pleased with the overall progress and variety of styles that these sets portray in painting a broader picture of the decade that was. If you were of age and hitting the clubs at the time — I think you’ll agree. If not — stick to the original Back 2 the 80’s series I put out last year.

For now — sit back and relax to these fantastic gems from our dance music history. Until the next time…ENJOY!

8. Janet Jackson – What Have You Done for Me Lately (Hot Classics Remix)

11. Samantha Fox – I Wanna Have Some Fun (Select Mix Remix)

12. Whitney Houston – I Wanna Dance With Somebody (Select Mix Remix)

13. Debbie Gibson – Only In My Dreams (Hot Tracks Mix)

20. Rick Astley – Never Gonna Give You Up (Hot Tracks Mix)

22. Whitney Houston – How Will I Know (Select Mix Remix)

23. Janet Jackson – When I Think of You (Select Mix Remix)

25. Taylor Dayne – Tell It To My Heart (Select Mix Remix)

After having finished the Exposé diva series, I decided to round out a couple of previous requests for 80’s iconic artists. The next …Read More, Stream and Download

The hardest part involved in making these sets is tracking down the songs; especially songs whose title is flip-opposite of what you …Read More, Stream and Download

Well, batten down the hatches, lower the boom and raise the mizzenmast because Party Favorz is moving full speed ahead! I’m back …Read More, Stream and Download