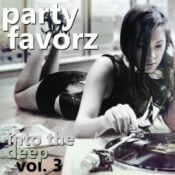 I want to give a HUGE shout-out to our longtime follower from the UK @Soeno for fixing a major issue with the site. If it wasn’t for him, ya’ll wouldn’t be merrily streaming or downloading right now. So give him a BIG bear hug for being my extra set of eyes.

As promised, I’m back and digging in deeper and darker with ‘Into the Deep [vol. 3]’.

This set kicks off with the deceptively delicious ‘Things We Might Have Said’ by Cari Golden feat. Reinier Zonneveld. The track is a slow-burner with it’s light pulsating synth that builds with the anticipation of release only to resume a steady low-key beat. Climax never arrives, rendering the listener with a serious case of blue-balls.

We quickly move into the 90’s prog-classic ‘Plastic Dreams’ by Jaydee that was the forerunner for the alt-progressive house movement. Coupled with Groove Armada’s ‘Superstylin’, which echos another 90’s era classic ‘Born Slippy’ by Underworld, the two songs compliment each other perfectly but don’t lay out the direction of the overall set.

To keep you rooted in the here and now, the set transitions into several house tunes (on dark tip) that add illumination and prevent listeners from sliding into the abyss.

By the end, ‘Into the Deep’ begins to transition back to where it began before closing the set out on a very uplifting positive note with ‘White Keys’ by Redondo & Deepme making the overall journey worth the trip.

I have a very special Tribute set dropping later this week and am trying to see if I have enough time to squeak out a BackSpin request from long ago. No promises on that one.

Expect the long-delayed EDM now DANCE set, which will be this year’s ‘Jingle Electric‘ followed by the annual ‘Holiday Edition‘ the week after. I am a man of many talents; so walking and chewing gum at the same time is second nature to me. It’s not uncommon for me to be working on multiple sets simultaneously.

I hope everyone has a fantastic weekend. Until the next time…ENJOY!

So much for not posting anything this week. I meant to put it up yesterday but I lost track of time. Spin …Read More, Stream and Download

Sorry for the delay in getting this post up.  I’ve been jerking around with adding a “Fan Page” on Facebook and it …Read More, Stream and Download

Party Favorz has reached our goal for the funding needed to continue hosting this site. Massive thanks to all the donors who …Read More, Stream and Download

Just finished Deep Edition 2007 v3 a few days ago. Starts off with some nice low key house, which builds on top …Read More, Stream and Download