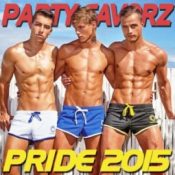 Somewhere this week I lost a day.  I’d swear yesterday was Thursday and stayed up all night binging on the new Netflix series “Sense8.”  As a result, I rolled out of bed later than my usual 6am only to realize that today was already Saturday and that I missed my Pride post for yesterday.  Better late than never and I believe you will pleased because this sucker is gonna blow the roof off!

The United States is on the cusp of a MAJOR change in policy towards gay marriages.  The SCOTUS, is set to hand down a decision challenging a ban on same-sex marriage that will have a rippling effect throughout all 50 states.  Just because I recently had a failed 14-year relationship that didn’t get to see this important recognition DOES NOT mean I have soured on EQUALITY FOR ALL.  To the contrary, gay rights have come a long way in this country but it’s been a difficult journey to say the least and things have been moving really fast over the past five years.

In short, this decision is expected to split the court with a swing vote by Justice Kennedy tipping the scale in our favor.  Even if marriage is not an important issue for you personally, this decision will be historic and will pull out another peg from the four-legged stool of injustice that has been plaguing the LGBT community for a lifetime.  Party Favorz stands in full support for the rights of these good folks and their families to finally have the recognition they rightfully deserve.

As I had mentioned in my prior post, my domain (partyfavorz.com) is set to renew on June 18th as is the hosting for the site.  I had their top-tier package last year but after looking at the cheapest possible options, I figured I can get away with their base plan.  While this site drums up quite a bit of traffic, most of you good folks who follow me regularly get your updates through the various social-media options I have available and in the majority of cases off of your phones.  You can thank Big Brother, uh I mean Google Analytics for providing this invaluable information.

Nevertheless, I still need to maintain my presence on the internet with the site from which all these alternative sources of accessing my content are available.  So, I went ahead and re-opened the Party Favorz Vault and am once again offering unlimited access to ALL of my past podcasts for a flat-rate of $40 annually.  Since this is the month of Pride, I am also offering access to just the Pride folder and the majority of its contents (including the classic Pride sets) for a flat rate of $10 through July 4th.  In fact, I plan on providing low-quality streaming on them in the next couple of hours for those that are interested.

For those of you who already subscribe, I have re-added the PayPal button on the front page so that you might consider a one-time donation to help offset my costs.  I need to come up with $60, which for the most part is not a lot, but after my recent split with Rick (see here), money IS too tight to mention.  In the interest of keeping Party Favorz afloat, please consider making a donation of $5, $10 or anything you can afford.  In the immortal words of Depeche Mode “everything counts (even) in small amounts.”

I’ll be back next week with the earlier than usual Beach House Edition.  Until then …HAPPY PRIDE and as always ENJOY!

Welcome to the annual Spring Edition 2018 featuring the hottest circuit anthems for your workouts and festivities! No sooner than the first …Read More, Stream and Download

With a massive heat dome sitting over 2/3 of the country this weekend, I can’t think of a better way to cool …Read More, Stream and Download