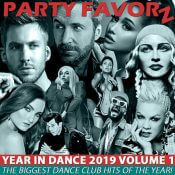 Party Favorz started right at the time the presidential elections began to heat up as Democrats narrowed their choices down to Hillary Clinton, Barack Obama, and John Edwards in 2007. Three elections and two presidents later, we’re still here right after the impeachment of (not my president) Trump.

During this period, Party Favorz has been part of the revolution in technology like gigabit internet, the iPhone, file sharing all the way to music streaming services. We’ve also witnessed the evolving trends in dance club music later coined EDM (Electronic Dance Music), which frankly — most of it has been since the 90s but has its roots in the 70s (Donna Summer “I Feel Love”).

We’re literally on the precipice of coming full-circle and as predicted, Disco is making a comeback in a big way. While Future House, Electro House, Reggaeton, Moonbatan, and Trap have been the mainstays over the past several years and often merged into one another — the eventual return of Disco was inevitable. Indeed, it never went away but was buried in the underground scene and relegated to a select group of tastes that considered themselves connoisseurs of the genre and eventually slapped it with its own new label “Nu Disco.” Call it what you want, but it’s still Disco.

HOW WE DECIDED WHAT SONGS TO INCLUDE

For the uninitiated, the Year in Dance series is a compilation of the top Dance Club tracks of the year. In deciding what makes the cut, Party Favorz pulls from Billboard’s Year-End charts in Dance Club Songs, Hot Dance Electronic Songs, Hot 100 Songs, and I pull a several of my personal favorites from the year that deserve to be included.

Billboard allots points to songs based on the number of weeks they remain on their charts. Typically, it’s one point a week, bonus points for entering the Top 10, and then they’re assigned higher point values for each position they hold in the Top 10. It’s entirely possible that a song that never even hits the top of any of their charts still ranks high for the year due to longevity on the charts.

Much like the Academy Awards, there’s a cut off date at the end of November of each year. Because Party Favorz understands people’s memories align with when a song is getting heavy rotation in clubs or dance radio, we also pull from the charts leading up to the last week before Christmas. For instance, Tiesto & Mabel’s “God Is a Dancer” just hit the top spot today and is included. As a result, it’s likely you’ll notice the same songs hit our year-end retrospectives two years in a row. Ariana Grande’s “Thank U, Next” was so massively popular that it generated ongoing club and radio play through the first half of 2019 despite peaking in 2018.

Other tracks that are included are massive songs on the Hot 100 that may or may not even chart on the Dance Club chart but are so popular — they generate a plethora of authorized and bootleg remixes. It would be blasphemous to leave these tracks out because of the demand for them on dance floors and the overall impact they have on popular culture. If we’re going to paint a complete picture, their inclusion is mandatory.

DANCE CLUB ARTISTS OF THE YEAR

Speaking of Ariana Grande, she was the top Dance Club artist of the year. In fact, the top 10 Dance Club artists are featured as the cover art for this first volume. they feature, Calvin Harris, David Guetta, Madonna, Kendra Erika, Ava Max, Mark Ronson, Bleona, Fisher, and P!nk. I disagree with two of them, but points gave them that position so who am I to argue.

I’m expecting a total of three volumes to round this year-end series out with another hopefully dropping on Saturday. For better or worse, these are the biggest Dance Club songs of 2019. ENJOY!

3. Selena Gomez – Lose You To Love Me (Colin Jay Remix)

25. The Chainsmokers feat. 5 Seconds Of Summer – Who Do You Love (The Scene Kings Remix)

The Year-end Edition 2007 volume 2 was originally posted together with the first volume.  They have now been separated to make it …Read More, Stream and Download

Put your hands up, put your put your HANDS UP! It’s time for another roof raisin’, house burnin’ walk through EDM land. …Read More, Stream and Download

I’ve been teasing out Gay Anthems For a New Generation  what seems like forever, but it’s finally here! From track list, editing …Read More, Stream and Download

Even with its seismic shifts, 2016 was a really good year for dance music. Rihanna had a particularly great year with one …Read More, Stream and Download