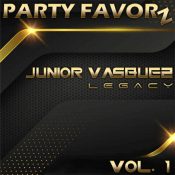 Junior Vasquez who was born Donald Gregory Mattern (really?) is an American DJ, record producer and remixer.  With ambitions of becoming a fashion designer, he moved to New York City in 1971. His enthusiasm for DJ Larry Levan at the infamous Paradise Garage led him to Shep Pettibone (another DJ/producer begging for a Legacy induction) where they edited mixes for multiple artists like Madonna, Whitney Houston, Janet Jackson, Pet Shop Boys, and more.

Several of his earliest underground house hits like “Work That Pussy” and “Drag Queen” were under the moniker Ellis D with the latter featured here. In 1989, he co-founded the Sound Factory and simultaneously became an in demand remixer for several big label artists. After the Sound Factory closed in 1995, he held multiple residencies including at the Tunnel, and subsequently returned to the former Sound Factory now called Arena.

Junior introduced Madonna to vogue at the Sound Factory, which served as an inspiration to massively successful song in 1990 by the same name. At the time, she was making a name for herself on the dancefloor by embracing the emerging House Music sounds and flipping them to a more commercial audience. She has long been associated with dance music trends by associating herself with underground names like Shep Pettibone and William Orbit before latching onto Junior Vasquez to remix several tracks from her “Bedtime Stories” album. It was around this time she had allegedly agreed to perform at one of Junior’s Sound Factory shows and bowed out at the last moment.

Queens being queens, Junior took one of the messages she left on his answering machine and looped it into the deep house groove “If Madonna Calls” without her permission using the phrase “this is Madonna” “are you there” “call me in Miami.” The bitch track went all the way to #2 on the Billboard Dance Club charts and spawned multiple remixes — including anniversary remixes. Afterwards, any chance of reconciliation and working together again went out the door. This actually turned out to be lucky move on her part as she went on to introduce the world to Victor Calderone and Peter Rauhofer (who was already riding high with Club 69).

Nevertheless, neither of them are getting any younger and clearly Madge is going through some things at the moment. It’s time to come together and bury the hatchet. Life’s too short for former besties to hold onto  grudges.

This set does not really reflect any official Junior remixes of Madonna other than “Secret” and the fabulous Marvin Gaye rendering of “I Want You” where Junior was commissioned to remix the track but it never received an official release.

Scroll through the list of of diva’s in the Party Favorz “Diva Hall of Fame” and you will be hard-pressed to find anyone Junior hasn’t remixed. From Annie Lennox to Whitney Houston and every diva in between, there’s hardly anyone in there that he doesn’t know or hasn’t remixed. Seriously! These two volumes honoring the master DJ are nowhere near as comprehensive and representative of this man’s work and barely scratch the surface. It would take probably 10 sets to really showcase his amazing talent.

In 2006, Junior gave an interview to A&U (America’s AIDS Magazine) about a 5 year period where everything was a blur due to abusing  crystal meth. I remember this article very well but it appears to have been taken down and his Wikipedia page omits it entirely. While he’s clean and sober now and starting a new chapter in his life — this is an important story that shouldn’t be buried. There are excerpts and message boards dedicated to this dark period in his life but it’s not fair to quote any of them without the original interview as a source. I understand there is currently a biopic being made about his life. Considering how long he’s been in the industry and how many artists he’s worked with — it’s my hope that they don’t whitewash an important factor of his life that could serve as inspiration for millions of people.

How This Set was Created

In an effort to present a wide array of Junior’s work, Party Favorz made the creative decision to include not just personal favorites or his biggest hits but his early work and rare unauthorized remixes. Most of the songs clock in at 9+ minutes with some topping 14 minutes. Some tracks used the drop in the middle to mix out of (a common practice in the 80’s and 90’s), while others were the beginning of a drop used by many DJs and perfected by Hex Hector that was designed to keep the floor engaged and acting as a bridge to the peak of the track. With a few exceptions, I edited most of them with the preciseness of a surgeon to keep listener’s from disengaging. This served another purpose, which was to cram as much material into each set as possible. There are a few exceptions like the amazing “With You” by Nomad, which is so perfectly executed — it only required minor editing.

They say that people only remember the negative things about you or your actions in life no matter how much good you’ve done. Junior Vasquez is one of those people where I hear queers shitting all over him because his work had gotten sloppy. Let these two volumes put everyone on notice that this man’s Legacy is every bit as stellar as his contemporaries. We need to honor his life’s work now — not when he’s dead and buried. Let these two volumes serve as a testament to his brilliance.

With a new manager and at 70 no less, Junior has already started a new chapter. In fact, his recent remix of Ashley O’s (a.k.a. Miley Cyrus) “On A Roll” was stellar and a top 5 Billboard Dance Club hit. He also has a remix of the Donna Summer track “My Life” coming out on a limited edition 17 disc box set “Encore” on March 27th. I am so there for this!

It is with much love and respect that Party Favorz honors the living legend Junior Vasquez — one of the greatest House Music DJ/producers the dance music world has ever produced with his own Legacy series. Experience the magic all over again!

4. Cher – One By One (Junior Vasquez Club Vocal Mix)

6. Deborah Cox – Who Do U Love (Junior Vasquez DMC Mix)

8. Whitney Houston – How Will I Know (Junior Vasquez Club Mix)

26. Dawn Tallman – Save a Place on the Dance Floor for Me (Junior Vasquez World Mix Show Edit)

Since the demise of the dynamic duo Thunderpuss in 2003, DJ Barry Harris had been largely absent from the commercial production and remix …Read More, Stream and Download