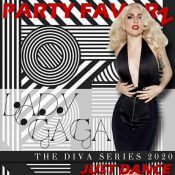 Stefani Joanne Angelina Germanotta, known professionally as Lady Gaga, is an American singer, songwriter, record producer, actress, and businesswoman. She is known for her consistent image reinventions and versatility in both music and entertainment.

We will stop right there because Lady Gaga has been a persistent presence in our lives since 2008 when she broke through with her album “The Fame,” which featured two #1 songs (“Just Dance” and “Poker Face”) and two top ten songs (“Love Game” and “Paparazzi”) followed by supplemental EP that featured three more top tens (“Bad Romance,” “Telephone” [with Beyoncé], and “Alejandro”).

2008 – 2010 was a dizzying time for Lady Gaga as she catapulted from an unknown to worldwide superstar seemingly overnight. Every appearance and every siting featured her in an new outfit designed to  keep her name in the paper.

She built on her credibility with fans (especially young gay fans) with the release of “Born This Way” whose self-titled single shot to #1 on the charts and embraced diversity of all stripes but none more than the LGBTQ community who embraced the song as our own.

By 2013, she released the uneven “Artpop,” which while filled with more dance anthems — it was conceptually overthought and the build-up to its release was a bit of disappointment but fans remained by her side.

She quickly followed-up the next year with a duets album with the classic crooner Tony Bennett on the “Cheek To Cheek” album which garnered positive reviews and netted the pair Grammy for “Best Traditional Pop Album.” It was precisely this moment the world knew there was more to this woman than a piano, persona and good voice — rather mad talented.

Lady Gaga followed up with “Joanne” a more personal album that achieved mild success. Two years later she was reborn as the leading lady of the remake of the movie classic “A Star Is Born” opposite of Bradley Cooper. The movie opened to rave reviews and it’s lead single “Shallow” (a duet with Bradley Cooper) reached #1 on the Hot 100 chart.

In 2015 her live performance at the Oscar’s singing a medley of songs from the “Sound of Music” soundtrack, which generated rave reviews because it showcased her vocal diversity like no other. The woman is truly a force within the industry.

With the release of the stellar “Chromatica,” 2020 has been a stellar year of Lady Gaga with the return to her dance roots which generated one of the biggest songs of the summer and the year “Rain On Me” with Ariana Grande.

Lady Gaga has been very open about her battle with depression — something this writer can personally empathize with. The tendency to battle through the most trying times and then pulling back before diving in again is a common theme for many though pulling back has never an option for me. I hope that after she finishes all the promotion and video releases for her current album — she’s able to take the necessary time off to regenerate and maintain a semblance of normality in her life.

It’s with much love a respect that Party Favorz for a third time honors the unbelievably talented and beautiful soul, Miss Lady Gaga into the Diva Hall of Fame where she holds her rightful place. ENJOY!

8. Til It Happens To You (Love To Infinity Club Mix)

21. Rain On Me (David Michael Remix) [with Ariana Grande]

33. Eh, Eh (Nothing Else I Can Say) (Random Soul Synthetic Remix)

It’s been a very long time coming but I finally sat down and put together a fitting tribute to the Queen of …Read More, Stream and Download

From Fly Girl to backup dancer for Janet …oh wait!  I’m getting my DIVAS mixed-up.  Let’s try this again … From Soul …Read More, Stream and Download

It’s time to re-launch the infamous and wildly popular Diva Series. I could think of no better way to do that than …Read More, Stream and Download