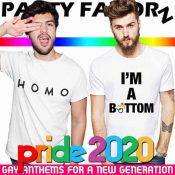 Every year during Gay Pride, the question “what constitutes a gay anthem” has been asked and answered in countless posts about the subject — even on this site. Party Favorz wants to break it down so “others” can have a better understanding as to why certain songs attract gay folk like flies to honey.

By quoting the 2002 book “Queer,” Wikipedia gets it mostly right but goes off the rails in other areas:

The lyrics of gay anthems are often marked by themes of perseverance, inner strength, acceptance, pride, and unity. Ten elements were identified by the editors of the 2002 book Queer, which they claim describe themes common to many gay anthems: “big voiced divas; themes of overcoming hardship in love; “you are not alone;” themes of throwing your cares away (to party); hard won self-esteem; unashamed sexuality; the search for acceptance; torch songs for the world-weary; the theme of love conquers all; and of making no apologies for who you are.” -Gay anthem from Wikipedia

They go onto list a variety of songs that they think are written down in the gay annals of history with many of them being so off the mark that it leaves us scratching our head in bewilderment. Party Favorz even gets a mention (without mentioning us) when they list “Lady Gaga’s “Born This Way”, and Ariana Grande’s “Break Free” (both of which are included here) considered as gay anthems for the new generation. Sound familiar? That’s only a tacit acknowledgement of Party Favorz’ contribution to the LGBTQ+ community but we’ll take it.

THEMES OF A GAY ANTHEM

The book “Queer” provides the definitive list of the types of songs that meet the criteria for a gay anthem:

As you can see — the qualifications are endless but never without reason.

All these themes are explored one way or another in this 5-hour set, which features modern-day gay anthems as well as past anthems reworked for today’s dance floors. While by no means complete — I dare you to find anything remotely comprehensive than what’s contained here.

THE MAKING OF A GREAT GAY ANTHEM

There is one underlying theme that should immediately appear apparent when you browse the track list. That is the inclusion of an overly abundant remixes by DJ Barry Harris. Aside from his record-breaking work with Chris Cox as part of the Thunderpuss duo from the late 90s to the early Millennium — Barry has expanded his reach to gay and straight dance floors across the globe with his keen sense of taking songs and literally transforming them into monster anthems like no one else currently in the business. Just look at what he did with “Rise Up” by Andra Day, which is not only pertinent to the Black Lives Matter protests currently overwhelming the globe but to the every day struggles of the LGBTQ+ community. The man is a living icon and his contributions to the dance floor and to our lives deserving of recognition.

Given the uncertainty of the future of Party Favorz — we’ve gone back and reworked or expanded our most popular editions that will hopefully leave a lasting impression with listeners for decades to come. We hope that you enjoy this ultimate guide to gay anthems for the modern era and continue to support our efforts until we can longer carry the torch.

There is still one final Circuit & Anthems Pride set that’s bound to please, which will drop next week. So please don’t think we’re done yet. Until then…ENJOY!

Two additional tracks were added at the last minute this morning causing this release to be delayed. It was the belief that these songs and artists are imperative for inclusion as they have been significant contributors to the LGBTQ+ community since the beginning of the Millennium.

9. Whitney Houston – I Wanna Dance With Somebody (Kepa Remix)

28. Cheryl Lynn – Got To Be Real (Alien Disco Sugar Remix)

39. Kylie Minogue – All The Lovers (The ‘Fire’ Extended Mix)

44. Calvin Harris & Disciples – How Deep Is Your Love (Extended Mix)

I see many of you have already been hitting up on last year’s X-Mas Dance Mix. FYI, all past Christmas dance mixes …Read More, Stream and Download

Pushing forward with our latest 90’s Eurodance non-stop mix series — Party Favorz picks up the beats and kicks this set off …Read More, Stream and Download

Happy Friday everybody! I’m back with pt. 2 of the 90’s House, Techno & Eurodance Classics. I’ve got a lot on my …Read More, Stream and Download